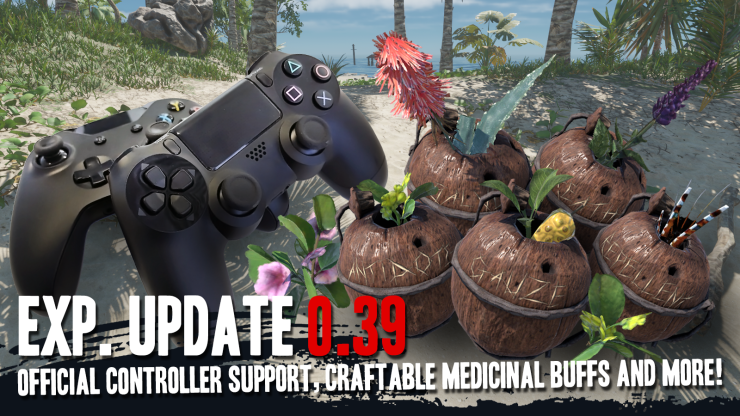 Dual-analogue style Controllers are now officially supported in this update. You can view the controller mapping in the Input settings menu. See the patch notes for more info and the changes to the input system.

You can craft a new item – the Coconut Flask. These flasks can be used as an ingredient together with native plants to craft Medicinal Buffs, which you will find in the new Consumables crafting category. There are 5 new medicinal buffs: Antidote, which cures poisoning; Gauze, which stops bleeding; Aloe Salve, which prevents sunstroke; Breath Boost, which increases your breath by 50% for 3 hours; and Shark Repellent, which repels Sharks for 12 hours. The medicinal buffs use three new plants: Pipi, Wavulvula and Ajuga. These are small native plants that can be found growing in the ground cover around the islands. All of the recently added plants are farmable as well so you can collect and grow these new plants to make your medicines.

The Sunburn status effect has had some more tweaks in our efforts to really dial in the new environmental effects. The Sunburn status effect has been renamed to Sunstroke as it makes more sense. To recap – your sun exposure is kept track of in-game which is shown visually as sunburn on your arm. The time it takes for you to burn is based on the UV index, the same as before. If you are exposed for longer than the time it takes to burn you’ll get Sunstroke. When you’ve contracted Sunstroke you need to find shade to reduce your sun exposure. You can keep track of your sun exposure by checking for visual signs of sunburn on your arm. Aloe plants can be used to immediately reduce your sun exposure. This can be a simple way to prevent Sunstroke if you pay attention to the sunburn arm effect and re-apply every so often so it doesn’t escalate into Sunstroke. The other option is to be pro-active and craft Aloe Salves which will completely prevent any sun exposure and Sunstroke for 12 hours. Sleeping in a Shelter is a quick way to remove Sunstroke if you’re unable to craft a salve.

TL/DR:
– If you get Sunstroke you need to reduce your sun exposure by finding shade or using one of the items below, otherwise you will stay sun stricken.
– Aloe resets your sun exposure. This can essentially prevent Sunstroke if you pay attention to your sunburn arm effect and re-apply Aloe every ‘x’ hours (‘x’ is based on the UV intensity).
– Aloe Salves completely prevent sun exposure and Sunstroke for 12 hours.

There’s also been heaps of tweaks, so be sure to see the patch notes to catch them all.
Have fun 🙂

– Added official Controller Support!
Please note that the Cartographer has limited functionality with a controller and the Map Editor is not supported.

– Added new Input System.
There have been some big changes to the input system which is now much more efficient than the old system. It’s fairly boring to talk about but a big deal; supporting multiple controllers is another step towards supporting multiple players in the scene. The changes to the input system potentially affects a lot of other systems so we appreciate your bug reports as always.